This is the category News

A European crypto mining company appointed ChESS to source specialized IT equipment and graphic cards, and assist them along the logistic and import process. We identified a manufacturer of dedicated mining equipment, structurized the payment flows and pre-shipment inspections, and brought the import and deliveries to a good end.

ChESS assisted the Belgian company Aerosleep, a manufacturer of high end safe sleeping systems for babies, in the design and roll-out of its export strategy for the Chinese market. Prior to the official launch at CBME Shanghai in July 2016, ten intensive months of negotiations, preparational work such as the setup of the Tmall Global flagship store, the registration of the Chinese brand name, translations, market research and product trainings were done. END_OF_DOCUMENT_TOKEN_TO_BE_REPLACED 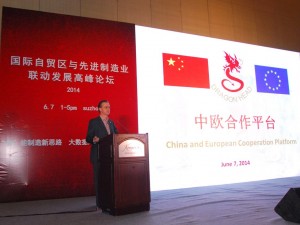 More then 200 people for Chinese companies and government organizations joined the event to listen to more than 10 speakers.

Topics ranged from several updated about the Shanghai Free Trade Zone to cross-border investments and business to new trends in logistics and manufacturing.

Etienne Charlier gave a presentation about how ChESS can assist Chinese companies in accessing the European market,  and developing reliable partners in Europe. The main topics were:

The event was organized by the Suzhou Industrial Park. 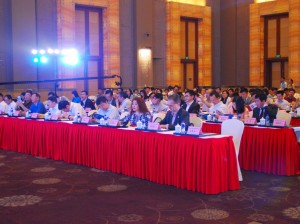 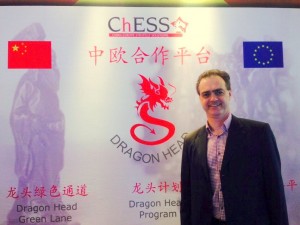 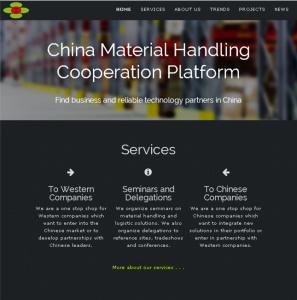 The MH Platform is structured to allow material handling companies from China and from Europe to develop business and to capture opportunities that China currently offers. Its objectives are:

The platform is driven by business associations in the field of material handling and consulting firms. ChESS is one of the founding members together with the China Association for Warehouse and Storage and Logistics and Material Handling magazine.

We will dedicate a section in this website to the programs and initiatives you can benefit from. Among others:

MOU signed between BCECC and Mofcom

On 13 June 2013, on the occasion of the Chinese Dragon Boat Festival, ChESS and China Conduct jointly organized the first edition of the Double Dragon festival, in the presence of Mr Xiang Shihai, head of the cultural department at the Chinese embassy in Belgium and Mr Johan De Clerck, director of the Development Agency East Flanders. The “double dragon” event refers to the Chinese dragon boat festival combined with the dragon on the tower of the Ghent belfry, in which the event was organized.

At a reception held at the Chinese Embassy, Reynders reviewed the frequent highlevel visits between the two sides in the Year of the Dragon.

The Year of the Dragon has been a year with joy for Belgium-China relations, and the Year of the Snake will also be a year of success, Reynders said.

He promised that Belgium would work with China to deepen their bilateral relations.

Faced with the international financial crisis, he added, the two sides should turn the crisis into an opportunity to further deepen mutually beneficial cooperation and inject fresh vigor into the development of bilateral relations. END_OF_DOCUMENT_TOKEN_TO_BE_REPLACED

ChESS guided both parties through the distributorship negotiations, and provided practical assistance during the early stage of cooperation.

END_OF_DOCUMENT_TOKEN_TO_BE_REPLACED

From Silk Road to Silk Rail

There are already a number of European trial projects under way for “green lanes” in sea transport. However, this has not yet been done for cross-border rail transport. The Belgian customs service played a leading role in tackling this problem: together with their Chinese counterparts they looked at various ways of setting up a Green Train Lane (GTL) with customs and other inspections being reduced to a minimum.
During the trade mission to the People’s Republic of China in October this year, the Chinese and Belgian customs authorities signed a Memorandum of Understanding in which among other things they agreed to give support to the GTL project and develop it further. Practical steps are being worked out by the Chinese and Belgian customs services to implement the Green Train Lane between the two countries as quickly as possible.

Six months after the start of the project the results are positive. “Thanks to this rail link, Antwerp will be seen even more clearly as the European logistics hub for trade in both directions between the two continents,” declared port alderman Marc Van Peel. The new rail connection enables goods to be carried between Antwerp and Chongqing in two to three weeks, compared with 40 days or so by sea. While rail transport is more expensive it enables the goods to reach their destination more quickly. The train that arrived on 15 November took 21 days to make the journey, a speed that was achieved thanks to good collaboration at the various border crossings along the way.

There is potential for a lot more time to be gained here, according to Koen Helsen, chairman of the Province of Antwerp Development Corporation: “it was this collaboration between the various authorities that enabled us to set up the rail link in the first place. Further collaboration will now make it possible to reduce the overall time for the trip even more.”

The Port of Antwerp has announced it has made progress on the 6,200 mile Antwerp to Chongqing rail connection, a cornerstone of port development toward establishing the port as a global hub.

Belgian Customs plans to establish a Green Lane project to expedite the shipment of goods along the rail connection. To that end, Belgian Customs’ project manager, Christiane Verlent, is in Chongqing for negotiations, according to a port statement.
The project was established in 2010 by POM Antwerp (Development Authority of the Province of Antwerp), the Antwerp Port Authority and Belgian Administration of Customs & Excise.

Antwerp plans to promote itself as a hub for the broad hinterland, stretching beyond the surrounding regions to the whole of Europe, West Africa and North and South America. This means that goods destined for China will be gathered from very different regions in the Antwerp port and can from there be put on the rail service to China.
The transit of goods works in both directions. The supply can be performed by vessel, deep sea or short sea, or by train.

Since the beginning of May, intermodal operator Hupac has offered a daily service from the Combinant terminal in the north of the port of Antwerp to connect Antwerp with Poland and further with Russia and China together with its partners Russkaya Troyka and Eurasia Good Transport. Chongqing is one of the final destinations of this service.

“Within foreseeable time we can expect to welcome sales offices and distribution centers from well known Chinese brands and companies in our region,” Koen Helsen, president of POM Antwerp and Vice-Governor for Economy, said in a statement. “Through this initiative we hope to position ourselves again as an economical attractive investment region for these companies.”

9 August 2011 (SinoCast Daily Business Beat via COMTEX) -SHANGHAI- GDF Suez, a French multinational energy company, has been in in-depth talks to sell 30 percent of exploration and production business at at most EUR 3 billion to China Investment Corporation, the country’s sovereign wealth fund.

The French company is attempting to reduce liabilities in terms of an agreement, according to sources close to the matter, pointing out that the agreement has not been clinched but is expected to be released on Wednesday at the earliest.

GDF Suez will bring a valuable finance partner and will swiftly enter fast-growing market in Asia Pacific after the agreement is inked. That will help the company’s chairman and CEO Gerard Mestrallet achieve his target, cutting debts by EUR 10 billion to EUR 4 billion to EUR 5 billion.

GDF Suez has built a considerable water service and wastewater treatment business in China, and it expects to strengthen business partnerships in the country while Chinese companies are to launch competitions on the global energy market. The French company earlier aired that it was to shift focus to Asia.

Belgian chemicals giant Solvay has announced the launch of the construction of a high added-value specialty polymers plant in Changshu in order to meet the growing demand for these products.

The plant will be built on Solvay’s industrial site in Jiangsu Province and should be operational by the start of 2014. It requires an investment of € 120 million and will significantly increase Solvay’s global production capacity for these speciality polymers.
The objective is to strengthen Solvay’s position in the logistical chain of fluorinated products in China, by offering greater proximity to customers, and to allow Solvay to benefit from the enormous growth potential of this dynamic region.

This transaction is the result of a year long searching for a good partner to give the company an international boost, after the financial results for 2009 had been quite negative and 2010 saw more reduced sales figures.

The first steps on the right path were already made under the old management, as Christian Salez became the newly appointed CEO, Belgian fashion designer Veronique Branquinho the new artistic director and modernisation and internationalisation the new keywords.

Founded in 1829 by Charles Delvaux, the leather company is one year older than Belgium itself. It had stayed in the Delvaux family’s hands for 104 years, but in 1933 all shares were sold to the Schwennicke family. Almost 200 years after its creation, Delvaux leaves Belgian hands for the first time.

By contrast, the Chinese company is only a few months old, but burning with ambition: the luxury oriented private equity group already bought a participation in French shoe producer Robert Clergerie and is led by Jean-Marc Loubier, ex-Louis Vuitton.

Bank of China to set up shop in Brussels

If the Banking, Finance and Insurance Commission (CBFA) approves, the Bank of China is set to be the first Chinese bank with offices in Brussels. The Bank of China is the third-largest bank in China and hopes to serve Chinese companies that are established in Belgium. One of these companies is Huawei, which manufacturers telecommunications equipment for companies like Vodafone, Telefonica, KPN and Belgacom, and whose Belgian office has a staff of 50. At the end of last year Huawei announced that it intended to open a research centre in Louvain-la-Neuve. The Industrial and Construction Bank of China (ICBC) is said to also be planning a branch in Brussels, and has already sent two of its staff members to Belgium on an exploration mission.

Direct flights from Brussels to Shanghai

The Chinese airliner Hainan Airlines is restarting flights from Brussels to Shanghai. Starting the end of May there will be three flights per week. At the moment Hainan Airlines has a direct flight four times per week between Brussels and Beijing.

Hainan Airlines is the largest privately-owned air transport company and the fourth largest airline in terms of fleet size in the People’s Republic of China. It already has direct flights between Brussels and Beijing and will start with the new Brussels to Shanghai connection the end of May. With four flights a week to Beijing and from May, three flights per week to Shanghai, there will be a daily flight from Belgium to China.

Hainan Airliners was established in October 1989 as Hainan Province Airlines. It was renamed Hainan Airlines and became China’s first joint-stock air transport enterprise in January 1993. It began scheduled services the beginning of May, 1993.

Hainan Airlines now operates scheduled domestic and international services on 500 routes from Hainan and nine locations on the mainland, as well as charter services.